Konstantin Tsiolkovsky
A space elevator would consist of a cable [4] anchored to the Earth's surface [6], reaching into space. By attaching a counterweight [3] at the end (or by further extending the cable for the same purpose), inertia ensures that the cable remains stretched taut, countering the gravitational pull on the lower sections, thus allowing the elevator to remain in geostationary orbit [1]. Once beyond the gravitational midpoint [2], carriage [5] would be accelerated further by the planet's rotation.
| 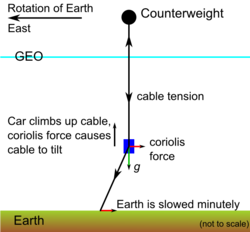 As the car climbs, the elevator takes on a 1 degree lean, due to the top of the elevator traveling faster than the bottom around the Earth (Coriolis effect).
Subscribe