In Communion with the Earth

Earth emits an ear-piercing series of chirps and whistles that could be heard by any aliens who might be listening, if they're out there.

The sound is awful, a new recording from space reveals.

Scientists have known about the radiation since the 1970s. It is created high above the planet, where charged particles from the solar wind collide with Earth's magnetic field.

It is related to the phenomenon that generates the colorful aurora / 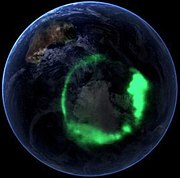 The radio waves are blocked by the ionosphere, a charged layer atop our atmosphere, so they do not reach Earth.

That's good, because the out-of-this-world radio waves are 10,000 times stronger than even the strongest military signal, the researchers said, and they would overwhelm all radio stations on the planet.

Theorists had long figured the radio waves, which were not well studied, oozed into space in an ever-widening cone, like light from a torch.

But new data from the European Space Agency's Cluster mission, a group of four high-flying satellites, reveals the bursts of radio waves head off to the cosmos in beam-like fashion, instead.

This means they're more detectable to anyone who might be listening.

The Auroral Kilometric Radiation (AKR), as it is called, is beamed out in a narrow plane, as if someone had put a mask over a torch and left a slit for the radiation to escape.

This flat beam could be detected by aliens who've figured this process out, the researchers say.

The knowledge could also be used by Earth's astronomers to detect planets around other stars, if they can build a new radio telescope big enough for the search.

They could also learn more about Jupiter and Saturn by studying AKR, which should emit from the auroral activity on those worlds, too.

"Whenever you have aurora, you get AKR," said Robert Mutel, a University of Iowa researcher involved in the work.

The AKR bursts — Mutel and colleagues studied 12,000 of them — originate in spots the size of a large city a few thousand miles above Earth and above the region where the Northern Lights form.

"We can now determine exactly where the emission is coming from," Mutel said.

Our planet is also known to hum, a mysterious low-frequency sound thought to be caused by the churning ocean or the roiling atmosphere.